Hongkong Post announced today (July 9) the release of a special stamp issue and associated philatelic products on the theme of "Games of the XXXII Olympiad Tokyo 2020" on July 23, offering best wishes for Hong Kong athletes in the coming Games.

The Games of the XXXII Olympiad (Olympic Games) will be held in Tokyo, Japan, from July 23 to August 8. Skateboarding, surfing, sport climbing, baseball/softball and karate have been added to the programme of the coming Olympic Games. The Hong Kong team will compete in a number of events, such as cycling (cycling track and cycling road), swimming, equestrian, table tennis, fencing, gymnastics, windsurfing and karate. This mega sport event is highly anticipated among the Hong Kong community as a whole.

The set of four special stamps features the sports in which the Hong Kong, China Delegation won medals or was qualified for previous Olympic Games, such as table tennis, windsurfing, cycling and swimming. Each stamp is produced with overlapping images in vivid colours outlined in gold foiling, adding a dynamic appeal to the sports on stamps.

The presentation pack adopts a design concept similar to that of the stamps, creating a gradient effect with bright and vivid colours. Its cover shows the silhouettes of various popular events such as track and field and rugby, as well as events in which the Hong Kong team will compete, including equestrian, gymnastics, fencing and karate, giving significance to the philatelic collection.

Starting from July 23, this set of special stamps and associated philatelic products, including a first day cover, mint stamps, a souvenir sheet, a presentation pack and serviced first day covers, will be placed on sale at post offices.

Information about this special stamp issue and associated philatelic products is available on the Hongkong Post Stamps website (stamps.hongkongpost.hk) or the ShopThruPost mobile app. 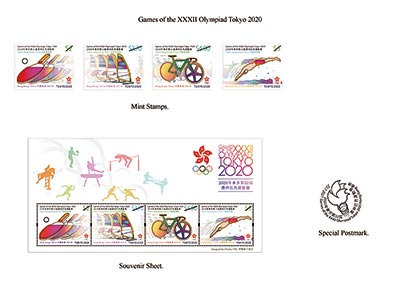 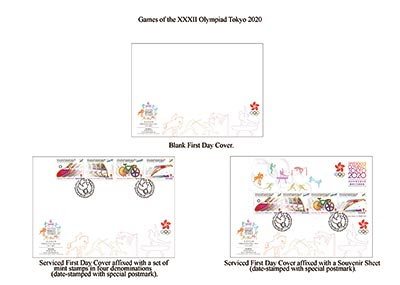 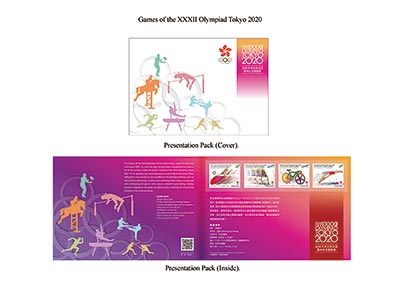