Hongkong Post announced today (October 22) the release of a set of special stamps on the theme of "Hong Kong-Zhuhai-Macao Bridge", together with associated philatelic products, on October 30 (Tuesday).

The Hong Kong-Zhuhai-Macao Bridge (HZMB) links the Hong Kong Special Administrative Region in the east and both Guangdong Province (Zhuhai) and the Macao Special Administrative Region in the west. The HZMB project mainly consists of two parts: the Main Bridge situated in Mainland waters, and the link roads and boundary crossing facilities in the three places under the responsibility of the respective governments. With the commissioning of the HZMB, the Guangdong-Hong Kong-Macao Greater Bay Area is now served by an enhanced transport network. Hongkong Post is presenting a special set of four stamps and a stamp sheetlet to mark this important milestone.

To mark the milestone, China Post, Hongkong Post and the Macao Post and Telecommunications Bureau will jointly issue a souvenir pack on the same day. The joint souvenir pack comprises a souvenir sheet containing a complete set of stamps issued by the three postal administrations. 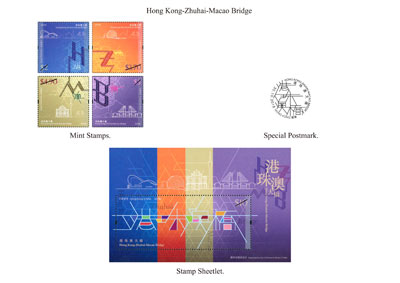 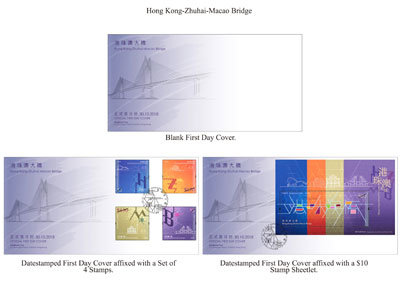 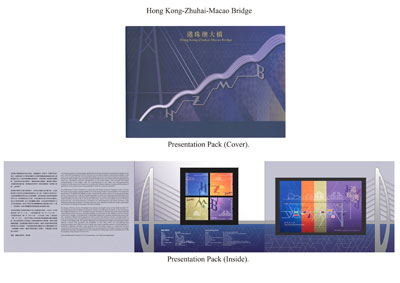 Presentation Pack with a theme of “Hong Kong-Zhuhai-Macao Bridge”. Joint Souvenir Pack with a theme of “Hong Kong-Zhuhai-Macao Bridge”.