The theme of the UPU's 46th International Letter-Writing Competition for Young People was "Imagine you are an advisor to the new UN Secretary-General; which world issue would you help him tackle first and how would you advise him to solve it?" Miss Fu made an eloquent expression of her ideas of how to eradicate inequality between the two sexes. With her well-written letter, Miss Fu outperformed many contestants and was awarded one of the 10 Gold Medals in the national contest.

The Principal of Tsuen Wan Government Secondary School, Ms Tang Suk-ching, attended the presentation ceremony with Miss Fu today and said, "We have been promoting writing culture in school and encouraging our students to care about their community. We were happy for Miss Fu when we heard that she had won in the contest. This award not only has a special meaning to Miss Fu, but also helps encourage our students to write more often and express their opinions and thoughts by writing."

Established in 1874, the UPU is a specialised agency of the United Nations which provides an important co-operation platform for postal administrations worldwide. Hong Kong participates in the UPU as a member of the delegation of the People's Republic of China. The UPU has held the International Letter-writing Competition for Young People annually since 1971. The objective of the competition is to encourage young people to express themselves and share their thoughts with others through letter writing.

In support of the UPU's 46th International Letter-Writing Competition for Young People in 2017, the State Post Bureau has organised a national letter-writing contest to select a winning entry to compete in the competition. To participate in the national contest, Hongkong Post and the Education Bureau co-organised a letter-writing competition for young people to select a representative from Hong Kong. Among the 100 entries received, Miss Fu's entry stood out from the rest and was then submitted to the State Post Bureau for national assessment in early March. 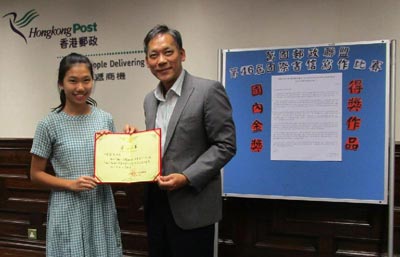