Hongkong Post today (September 12) announced that the "World Heritage in China Series No. 1: The Great Wall" stamp sheetlet will be released for sale together with associated philatelic products on September 27.

The construction of the Great Wall dates back to around 220 BC. Stretching over 6,700 kilometres in total, it is the world's largest military structure as well as one of the greatest ancient defence projects. The Great Wall demonstrates the indomitable perseverance and high wisdom of the ancient Chinese, unparalleled technological advances in ancient China and the long history of the Chinese nation. It was listed on the World Heritage List by the United Nations Educational, Scientific and Cultural Organization in 1987.

Information about this special stamp issue and associated philatelic products is available on Hongkong Post's website at www.hongkongpost.com and the Hongkong Post Mobile App. 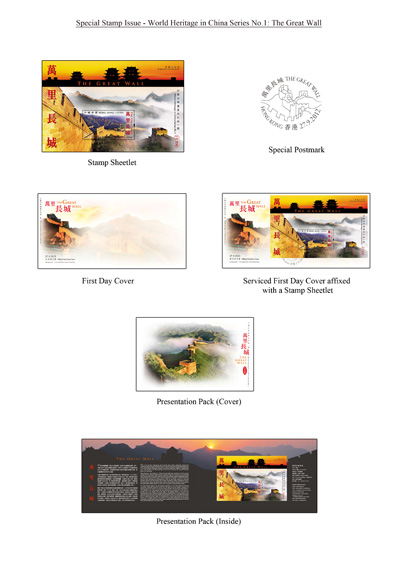