Hongkong Post today (December 8) announced that the 2014 Prestige Annual Stamp Album and the 2014 Annual Stamp Pack will be available for sale at all 38 philatelic offices and the PostShop at the General Post Office, as well as through ShopThruPost (www.shopthrupost.hk), from December 16 (Tuesday).

Stamps are a reflection of the society that produces them. Every year, Hongkong Post issues a wide variety of stamps with unique designs and featuring interesting themes that are eye-catching to senders and recipients alike. Stamp collecting as a hobby is widely popular, and this year's stamps appeal to philatelists both locally and elsewhere.

The 2014 Prestige Annual Stamp Album, priced at $498, presents a comprehensive collection of special and commemorative stamps, souvenir sheets and stamp sheetlets issued by Hongkong Post in 2014. The 2014 Annual Stamp Pack, priced at just $198, contains all special and commemorative stamps issued by Hongkong Post during the year. With gemstones as the theme and the design concept, the 2014 Prestige Annual Stamp Album and 2014 Annual Stamp Pack cover some of the major events of the year, revive our memories of the joyous festive occasions we celebrated, and broaden our knowledge in the fields of science, culture and art.

Whether celebrating the Lunar New Year or Christmas, reviewing East-meets-West paintings courtesy of the Hong Kong Museum of Art or exploring the delights of Hong Kong and Malaysian foods, this year's stamp issues present much to appreciate. From depicting the delicate beauty of Cantonese opera costumes and illustrating the marvels of local weather phenomena to presenting a range of indigenous Chinese dinosaur species, a world of wonder awaits. And by employing techniques ranging from embossing, silver hot foiling and 22K gold plating to lenticular and glow-in-the-dark effects, these 2014 stamps and stamp products are innovative in their presentations.

Given the interesting themes of the 2014 stamp issues and their unique designs, the 2014 Prestige Annual Stamp Album and the 2014 Annual Stamp Pack will not only be desirable acquisitions for philatelists, but also make delightful gifts for family, friends and business associates. 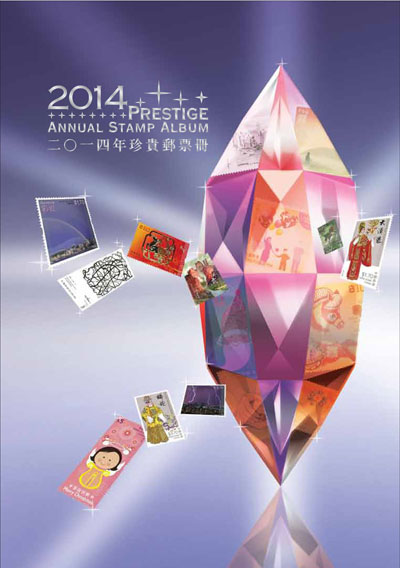 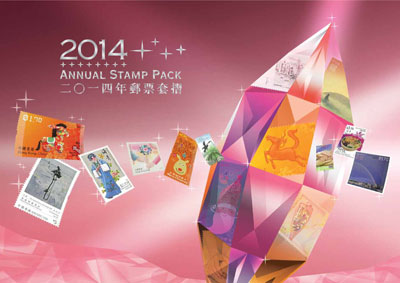