The "2014 Hong Kong Definitive Stamps", on the theme of the Hong Kong Global Geopark of China, were launched today (July 24) at a stamp issuing ceremony held at the General Post Office and officiated by the Postmaster General, Mrs Jessie Ting, and the Director of Agriculture, Fisheries and Conservation, Mr Alan Wong. Congratulatory video messages from representatives of geoparks in other regions and renowned geologists were screened at the ceremony.

The new set of definitive stamps features 16 geosites in Sai Kung Volcanic Rock Region and Northeast New Territories Sedimentary Rock Region. Mrs Ting said at the ceremony, "These stamps showcase the treasure trove of exceptional geological features in the Hong Kong Global Geopark of China." She added, "We hope to raise the awareness of both local residents and people elsewhere of the world-class geological landscape in Hong Kong as well as the importance of geological conservation through the new definitive stamps."

The result of "My Favourite Geosite in Hong Kong" online voting held jointly by Hongkong Post and the Agriculture, Fisheries and Conservation Department earlier was also announced at the stamp issuing ceremony. "Tai Long Wan" got the highest vote out of close to 100 000 votes cast. 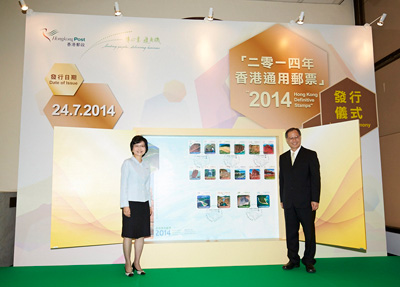 (From left) The Postmaster General, Mrs Jessie Ting, and the Director of Agriculture, Fisheries and Conservation, Mr Alan Wong, officiates at the "2014 Hong Kong Definitive Stamps" issuing ceremony.
Back